The Four Biggest Challenges the Next VA Secretary Faces 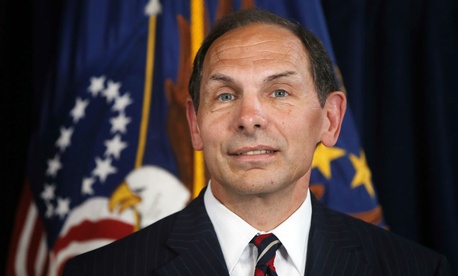 We now know who will inherit the broken Veterans Affairs Department, but fixing the agency's bureaucratic nightmare will be no easy task.

President Obama on Monday afternoon nominated Robert McDonald, a former CEO at Procter & Gamble who retired from the company in 2013. And though veterans advocates and lawmakers alike hope that McDonald will be able to use the managerial skills he honed in the private sector to whip the department into shape, he must prioritize the VA's many moving parts.

Here are some of the biggest challenges facing McDonald, assuming he is confirmed by the Senate.

Stop the bleeding: Let's not fool ourselves: McDonald is being brought in to clean up a catastrophic mess.

The department has suffered through scandal after scandal as government investigators uncover evidence of nationwide manipulation of data on how long veterans wait to receive medical care at VA facilities as well as allegations of veterans dying while waiting for care.

And, most likely, with investigations still ongoing—including criminal allegations of fraud—there are more revelations to come.

Although the scandal—and the behaviors that caused it—predate McDonald's nomination, veterans advocates argue that the easiest way he could do harm would be to not be honest about how deep the scandal goes.

"Accessibility and accountability are the key," said John Raughter, a spokesperson for the American Legion, when asked how McDonald should balance a scandal he had no part in creating.

But simply making sure things don't get any worse won't be enough.

Fix the VA's "corrosive culture": It's an ill-defined problem with even more ambiguous answers on how to fix it, and it is—without a doubt—McDonald's biggest challenge.

The focus on the VA culture, including a damning report released Friday from White House adviser Rob Nabors and Acting Secretary Sloan Gibson—has spotlighted the manipulation of wait times by hospital staff as well as the widespread problems with personnel accountability.

And though the buck stops with McDonald, he has plenty of people who would like to tell him exactly what to do. This includes lawmakers and a growing number of advocates who want the VA secretary to have greater firing power—particularly over senior officials, who they say have allowed the secret wait lists to exist for years as they faced pressure to meet deadlines handed down from the top.

At the same time, advocates want the VA to hire more doctors and increase veterans' access to private health care. They also want lawmakers to give the department more money, something Rep. Jeff Miller, who heads the Veterans Affairs Committee, has suggested won't solve the deeper crisis at the VA.

The Florida Republican wrote in an op-ed last week that giving the VA more money "is merely a short-term, emergency solution designed to deal with a bona fide ­emergency that VA created."

And though lawmakers have been focused on the recent health care scandal, veterans advocates believe the problems at the department spread far beyond its medical facilities. For example, the U.S. Office of Special Counsel announced earlier this month that it will look into allegations of retaliation against 37 VA whistle-blowers, which could muzzle future complaints.

"The retaliation against whistleblowers—that's a cultural problem that needs to be addressed," Raughter said.

And benefits workers also have to tackle the mountain of frequently overlooked pay and pension claims—namely an increasing number of appeals that can leave veterans in limbo for an average of two and a half years.

Win back veterans' trust: McDonald is a surprise pick by anyone's account. Scan the many lists published on who could be the next VA secretary, and you'll notice one thing pretty quickly: He isn't on any of them.

Veterans service organizations have complained that they have felt they were left out of the loop by the VA as it faces one of its worst scandals in recent history. They hope McDonald will change this.

"He will need to reach [out] to VSOs and other leading advocates for vets. The White House did not reach out to VSOs during their search process, and we hope they will now. The VA cannot do it alone," Paul Rieckhoff, founder of Iraq and Afghanistan Veterans of America, said in a statement.

The American Legion was an early backer of the push for Eric Shinkseki to resign, coming out ahead of the wave of lawmakers who would eventually call for him to step down.

While McDonald is himself an Army veteran, he doesn't follow the trend of tapping a top military official to lead the department. McDonald will "have to move quickly to show he is committed to and understands the post-9/11 generation of veterans," Rieckhoff said.

"We think that restoring trust is the No. 1 challenge ahead of him," Raughter said.

In many ways, McDonald will have to practice juggling his priorities to veterans while also keeping the department on track to reach two key department goals next year: Ending the backlog of disability compensation and pension claims and stopping veterans' homelessness.

"They're far, far short of the goal to eliminate veterans homelessness.… We hope to see them continue to make progress," he said.

Don't say anything stupid: Of course to become the lucky person responsible for all of these challenges, McDonald has to get over one crucial hurdle—Senate confirmation.

So far lawmakers are expressing hope that he can cure the VA's many ills. Or they are at least—in the case of Veterans Affairs Chairman Sen. Bernie Sanders—holding off on publicly forming their opinion on McDonald until after they meet with him.

But the VA is currently a political lightning rod, and lawmakers have shown little tolerance for VA officials who they think are trying to downplay how serious the crisis is that is now facing the department.

Oops, you forgot something.

The words you entered did not match the given text. Please try again.